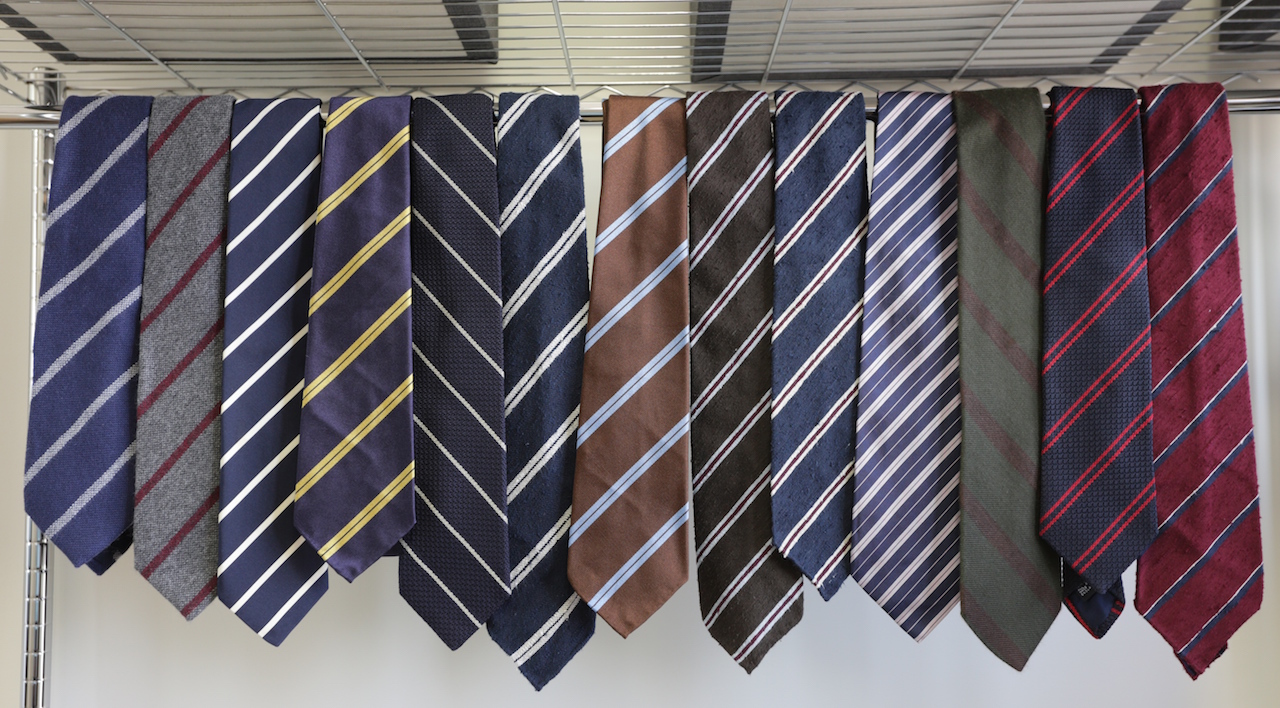 “A well-tied tie is the first serious step in life.”

Oscar Wilde (A Woman of No Importance)

One often mentions the British origins of striped ties. While the French talk of « cravate club », the Americans often refer to them as repp ties and the British make a distinction between regimental and college ties. A few precisions are necessary.

The word rep(p) comes from the French « reps » which is a ‘combination of weft and warp yarn’ and is especially used for furniture. The word does not imply stripes and rather describes the texture of the fabric and its striped feel or impression. A striped tie is not necessarily a repp tie and a repp fabric can be a solid.

One should point out that the French word itself comes from the English… It comes from the word rib: like the ribs on your chest or the sand ribs left by the tide, the word is used to describe a sort of parallel pattern (its Indo-European root means ‘something that covers’, ‘a roof’).

In England, one can use the term ‘striped tie’ but since they have a very specific meaning, they are also named in reference to the affiliation that they express, hence the terms ‘regimental ties’ or ‘college ties’ or any of the many other organisations that may have their own distinctive necktie (cricket club, drinking society, etc.).

Contrary to other countries, schools in the UK (and more especially universities) enable the young generation to become familiar with ties (and bowties as well) that involve affiliations.[1]

Oxford and Cambridge (whose singularity is often summed up by the portmanteau word, Oxbridge) is among the rare European academic places where one can find people wearing black tie (also called dinner jacket; « smoking » in French and tuxedo in American) or even white tie (“queue-de-pie” in French) in some ceremonies, as in the wildly festive May Balls.

Social life is a major part of the years one spends in Oxbridge and one keeps receiving invitations mentioning the appropriate dress code. There are many events in college life that require wearing a gown (whose length, fur, edge colour indicate what subject you study as well as your level—graduate, undergraduate, doctor, etc.).

For graduation a string of very specific rules have been stated by the University (« Obvious pin-stripes are not permitted » ; « White bow tie with white ‘bands’ must be worn »).[2]

As one can see, the sartorial education affecting thousands of students is about assimilating social norms rather enabling a quest for personal elegance.

Both universities set the tone early. Neckties indicating an affiliation seem to have become common in the 1870s’. The pioneers in that field were the young men form the I Zingari Cricket Club in Cambridge who in 1845 adopted the black, red and gold that symbolise leaving the darkness through fire to reach the light.

The history of St John’s College in Cambridge tells us about the beginning of their colours. Around 1895 their General Athletic Club established the colours that are still used by the college. As affiliation to the GAC was compulsory, there was no distinction between being a member of the GAC and the college and the colours of the club became, de facto, those of the college. It seems to show that academic neckties actually come from the sports club from each college who needed to promote their own identity.1 In a way, one could venture to say that the survival of heraldic codes today is connected to the emergence of modern sport in the late XIXth century.

In Oxbridge, there is a necktie for the university as a whole (with the university crest but also a different tie for the alumni) but one is more inclined to display the colours of one’s own college as each university comprises about thirty colleges with specialties in numerous disciplines.

The various patterns correspond to different circumstances. Each college has at least three different types of ties. The striped ties are used for everyday life whereas those with the college crest are more formal, owing to their black or dark blue background and will tend to be used for such occasions (formal dinner in Hall, for instance) although no explicit rules ever seems to have been stated in this regard. Then, there is a summer tie with a white background, more suited to garden parties or sports and worn from the beginning of the Easter term.

But there are many more patterns, corresponding to more specific circumstances. In St John’s College, Cambridge, for example, there’s a least a dozen different ties with a special meaning or affiliation. Alongside the striped, crested and summer tie, other patterns indicate that one is a member of the rowing team (Lady Margaret Boat Club), the rugby team, the choir, the Johnian Society, etc. According to one’s social activity, one can perfectly own a great amount of legitimate neckties![4]

In Cambridge, the main supplier for students and tourists is Ryder & Amies, opposite King’s College, on King’s Parade. It was originally a tailor’s shop, founded around 1864 by Joseph Ryder who went into a partnership in 1896 with Edward Amies, a member of the Chamber of Commerce and future mayor of Cambridge. Ryder & Amies is still a family business and is run by 5th generation members of the family.

It’s a long time since they have given up on the tailoring business and they are part of the couleur locale, allowing tourists to buy their souvenirs. But Ryder & Amies is still a vital part of Cambridge life, selling and renting gowns, ties and scarves bearing the colours of each college.

Steven Chambelain, a descendant of Edward Amies,[5] was kind enough to reveal some of the aspects of their history and neckties.

Could you give us an idea of the construction of your ties?

Some of the ties we have in smaller quantities are still made by hand completely. If it’s a larger quantity then the linings are attached by a machine then finished off by hand. We use a loose thread on the reverse of the tie. We use a heavy woven silk. Width at tip 3 ½” length 56” and yes we still use inches—the looms are all set up for feet and inches as well as our seamstresses!

Are the ties made in England?

A bit of both. If we have the time then some of the bulk stock is made overseas. Smaller orders and rush jobs are made in the UK.

When did Ryder & Amies stop its tailoring activity?

We gave up comprehensive tailoring when our last tailor retired back in the 80’s. Although we now run a small workroom just outside of Cambridge where we make all the scarves and gowns etc. in house and we have some seamstresses who have been with us for over 20 years now. We moved away from suit tailoring to concentrate on the gown business.

How have ties evolved recently?

The ties are pretty much the same. Polyester has improved over the years. Silk remains the same.

Do you have a pattern library ? Have patterns changed over the XXth century ?

Yes we have a couple of old pattern books going back a 100 years or so. Widths change every 10 years or so. Ties around wartime were made very short and had no lining. Two reasons for this one is that Gents always wore waistcoats so the length of the tie wasn’t an issue and the other is that silk was in short supply around wartime so corners were cut wherever possible.

How were the patterns created for each college: was there a specific model or was Ryder & Amies responsible for creating them?

The colours ties were usually created in conjunction with the College and Ryder & Amies. Crests or jacquards were created around the late 40’s and obviously the family crest of the college was used.

Is there a freedom in terms of design or do you use established templates?

Once a design is created by a club or college we keep a record. Whilst we advise on design we usually leave it to the club to decide. We also offer scarves as well and have recently launched a scarf builder online so that students can all sit round a laptop and play with colour combinations.

Apart from Ryder & Amies, who is the historical supplier of the University, there are other outlets such as A.E. Clothier who furthermore specialises in the variations from the main colours (college sports clubs, as well as club blazers—their website displays a very bold purple blazer with white and green stripes, for instance…).

Ede & Ravenscroft, the oldest tailor in the world (established in 1689), appointed with three royal warrants, also has a boutique in Cambridge. They specialise in academic gowns (offering 10% to students) and other ceremonial garments (orders of chivalry, peers’ robes, etc.). They are still active as bespoke and made-to-measure tailors and have a ready-to-wear collection.

TO HAVE AND HAVE NOT

The main thing about British striped ties is that you must be a member to wear them. They are not so much construed as accessories of personal style as markers of a social affiliation.
The quality of construction and the rigid patterns of the ties do not indicate a great aesthetic concern. Those neckties are for a captive audience who is not necessarily interested in elegance, as is demonstrated by the existence of not only silk ties but also polyester ones!

Their heraldic purposes clearly take precedence over their sartorial function, recognizing the college colours as being more important than the beauty of the colours or the harmony of the stripes. Crested ties are obviously very rigid aesthetically and allow little personalisation.

In the United States in the 1920s’, Brooks Brothers made the daring move to change the direction of the stripes (moving from the right-hand shoulder downwards whereas British stripes move downwards from the left-hand-shoulder).

Men’s style has since adopted striped ties and the creative patterns they allow but without keeping their heraldic implications. One should still bear in mind that this tradition is still alive and remains very vivid in the United Kingdom—balancing personal style with the display of such ties being yet another challenge for the contemporary gentleman.

[1] In the USA universities do have their own colours as well, but such academic identity is not really pervasive, except in the case of sport teams, and then it is often jumpers and other non-formal garments that bear such colours.

[2] A paradox of our time: despite the utter formality of such traditions, a ‘gender neutral’ approach has now been accepted. After pressures from the Cambridge Lesbian, Gay, Bisexual and Transgender students’ Union who considered that “the requirement for graduates to dress in the clothes traditionally associated with their sex was ‘distressing’ for some students”, men are now allowed to turn up to their graduation wearing skirts and women wearing a man’s suit. The wording of those sartorial rules no longer mentions dress codes for ‘men’ or ‘women’, but rather ‘option 1’ and ‘option 2’.

[4] And this is without counting some funny historical variations. According to legend (and personal sources that shall remain secret), in the late 50s’ in Cambridge, there used to be a tie with a picture of a tap on it. This was supposed to be worn only by men who claimed to have taken a bath in Girton, and possibly Newnham or New Hall as well, as these were women’s colleges. 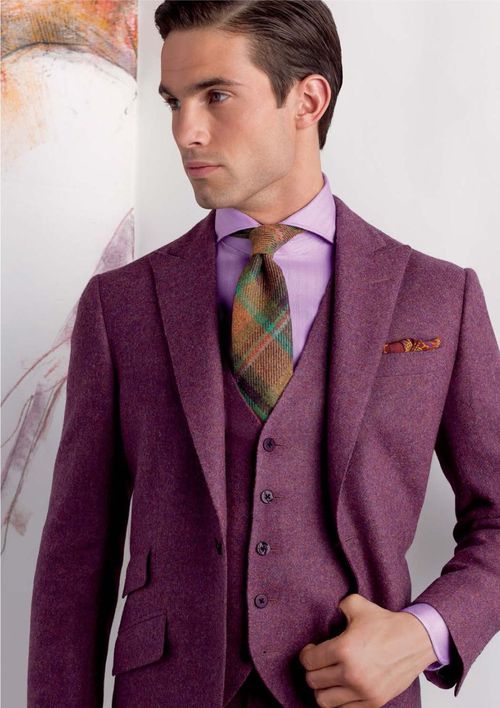 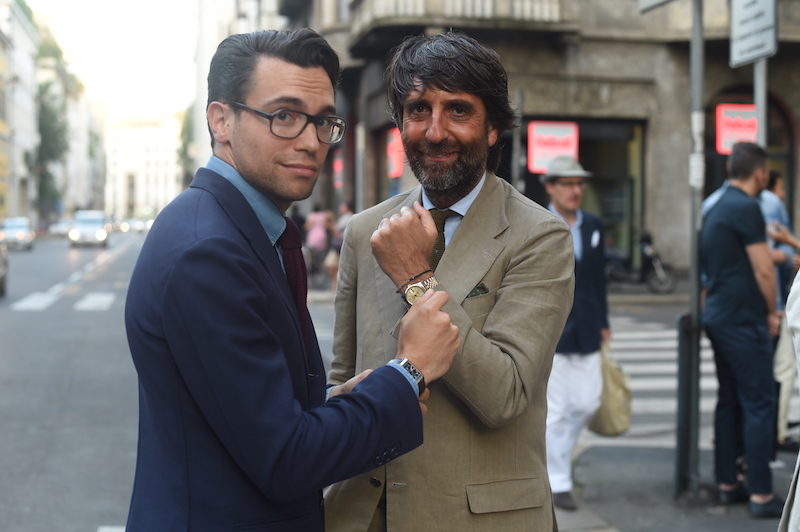 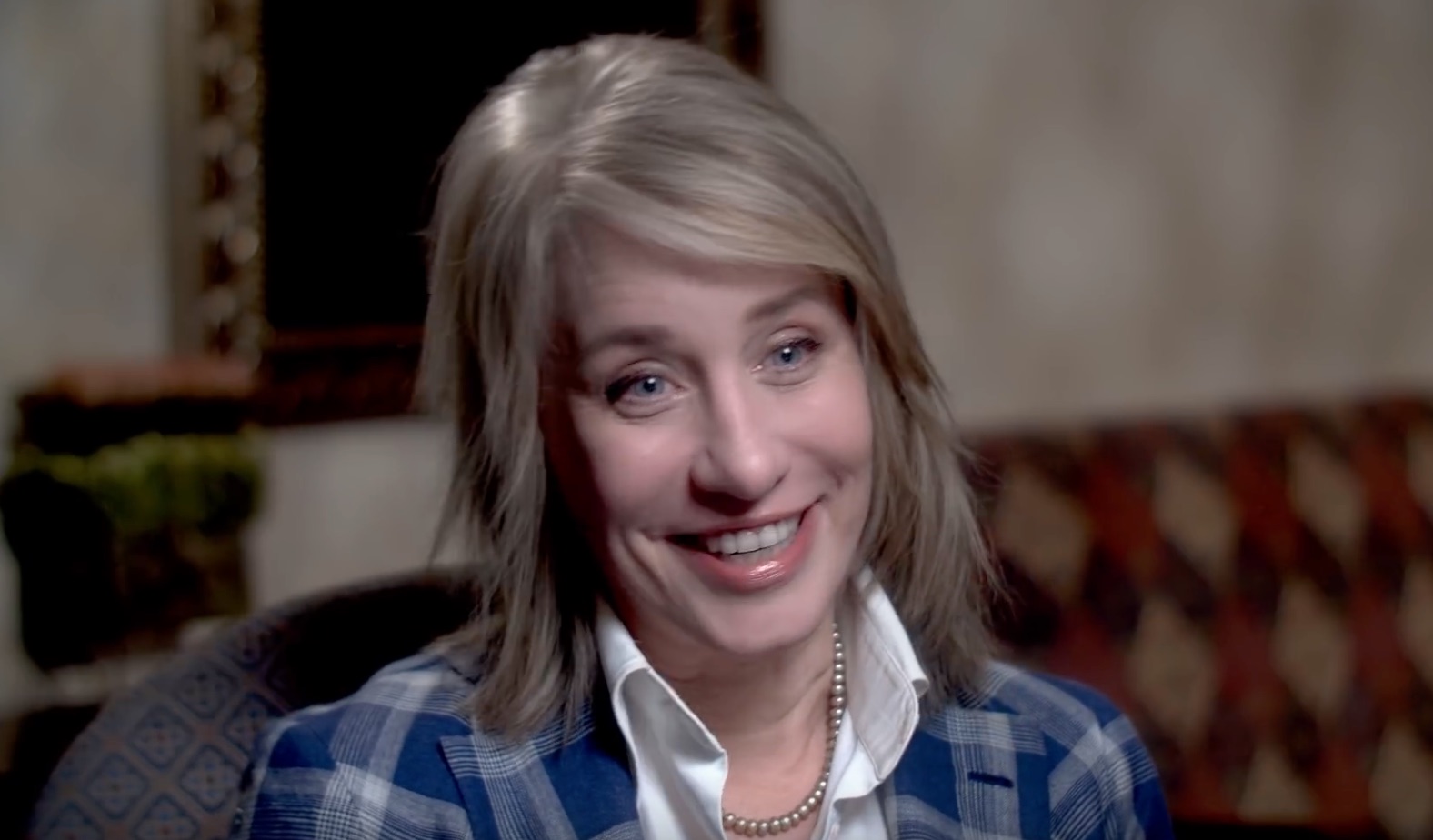